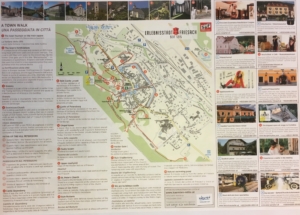 Within the concept of this project, we combine tourism, culture, labor market, social agendas and science to a common goal. We thank our supporters, partners and sponsors along with the province of Carinthia and European Union.

The medieval construction site, located in the southern part of riesach (the oldest city of Carinthia), which spans over 6.5 hectares, presents a great historical experiment to its visitors. A medieval castle is being erected – with medieval methods only and without modern tools, no motors or electricity. The main contribution to this construction site is established by human efforts and craftmenship as well as animal aid. The highest possible authenticity is the main aim of the project.

Additionally, only natural materials like wood, stone, lime, sand, and water are being used. 400 years of building history, from the Romanesque up to the late Gothic period, are being reconstructed. The castle complex includes the castle’s keep, the residential quarters, a chapel, the bailey, the castle garden and curtain walls with gates and towers. During your stay you will be able to experience the workmanship of blacksmiths, stonemasons, carpenters, bricklayers, mortar mixers and basket weavers first hand. Our guides will gladly explain the many work procedures on site. This will give you great insight into the exciting and at the same time strenuous everyday life of a medieval construction worker.

Rediscovering Old Knowledge:
Immerse yourself into a strange, long lost world. Feel like a time traveller. Learn about the hidden knowledge of our ancestors. What mastery lies behind basket-weaving, this ancient craftwork? What kind of magic turns iron bendable like willow branches? What’s the ideal position of the moon for woodcutting? In which season should one cut down trees to get the best wood? Which sorcery keeps together the stones of a wall? Where do old sayings like “Man forges his own destiny” come from? Experience the ancient technique of masonry with stones that were formed by hand by the hard working stone mason. Look over the shoulders of craftsmen and experience the knowledge of our ancestors.

The keep: The romansque tower prides itself to be the heart of the castle. It is the residence of the castle‘s lord as well as his family. The keep towers above the rest of the castle at highest point of the construction site. It is being erected with the help of stone ashlars and rubble. The building incorporate the castle‘s basement, the kitchen, the parlour, an additional floor for use during the summer time as well as a polygonal spire. The tower will measure around 22m in height once it is completed.

Brick Laying: Lime stone is being burned in a limekiln, so it can be mixed with sand and water in order to create lime mortar. The right mixing ratio is considered to be the batch mixer‘s professional secrecy, while the bricklayers and stone masons take care of the brick laying together. The mortar bed is being applied with the help of a trowel and the stones are being carefully laid out in a horizontal or vertical manner with the aid of a plumb and a mason‘s lacing cord.

Basket-Weaving: Bundles of hazel, willow, alder, and hornbeam were woven to make fences, wattles, doors, gates, and many other things. This job required a firm grip and lots of patience. Basket-weaving was considered a rural handicraft, or part-time trade (e.g. for craftsmen).

The Carpenter’s Hut: The carpenter’s field of work was vast. He was responsible for roof structures, their covering with wooden shingles, for the construction of scaffolds, ladders, runs, elevators, and cranes. Trees were cut down with axes. Shorter pieces of wood were split and chipped with a hatchet, and treenails were hand made.

Stonemason: The stonemason adjusted, smoothed, and laid the stones of the masonry. From the 11th century on, stonemasons with the use of newer and better tools produced cut stones of equal heights and lengths. This allowed them to build continuous layers of masonry in less time than before. Prior preparation of cut stones was mostly based on chance, resulting with stones of different forms.

Horsepower: The use of horses as working animals only made sense after the turn of the millennium, after the utilization of the horse collar. It was put around the animal’s neck and distributed the traction force between ribcage, shoulders, and withers. Only through use of the horse collar the full strength of the animal became accessible. Before the use of the collar, ropes were bound around the horse’s shoulders and chest, which painfully constricted its ribcage. This quickly lead to shortness of breath, and thus heavily reduced the animal’s work-efficiency.

Vertical Transportation: Around the end of the 12th century ramps, ropes and baskets were commonly used to transport various construction materials in vertical directions. Windlasses and rope pulleys, that were operated manually, were used in order to lift heavier ashlars. The word „crane” derives from the bird of the same name, since its stiff movements and shape are reminiscent of the avian.

Blacksmith’s Shop: The smith was very important at a castle’s construction site and after the completion of the castle. He was indispensable. He had to produce metal objects such as fittings, hinges, and locks with keys. In addition the tools for other craftsmen had to be hand made, and all metal equipment that was used daily had to be kept in good condition.